While we put the bike outside, everyone is startled by a police car with flashing lights and siren that enters the terrain of the hotel. It's Arthur Aten, the State Trooper who we have often seen at the races. He has come to "arrest" Sebastiaan and to book everyone who has exceeded the speedlimit of 70 mph that is valid on the SR305. These are real speeding tickets. He has made an arrangement with the local judge that these tickets will be dismissed. What a wonderful stunt!

When the tickets have been signed, further details still have to be filled in and the tickets will be given at the award dinner, the bikes are set up and pictures of the group are made. The team of Annecy manages to arrive when everything is done. This is yet another time that they unpleasantly surprise everybody. Earlier this week, they rode on the SR305 without permission. Thanks to the intervention of the organisation, they weren't arrested on that occassion.

After the pictures have been made, we prepare the bike and take some rest. We arrive at the start with plenty of time to spare. Thomas has got the time to warm-up properly. The bike is checked for the last time by the rest of the team, and we have a chance to chat up with other teams, the starters and Arthur. He is present again. His presence becomes funny when a car driver starts to argue with one of the ladies that take care of the road block. The State Trooper isn't even halfway to the scene, when the car driver backs away and sullenly heads back to his car.

Then it is time for the runs. We prepare the bike, inline skates are donned and the garmin is turned on. The GPS signal is turned off, because there isn't any signal inside a fairing made of carbon fibre. The sensor in the wheel will register the speed. Thomas has a perfect start. We follow in the chase car. It looks good. The wind that was too high in the first heat has dropped to a probably legal speed. Thomas' speed increases very gradually. He is doing a great job. He comes through the traps with a high speed. Just a good catch now, and he also succeeds in that. When Thomas comes out of the bike he is completely drained; we guide him to a chair, and hand him some water and dextrose. All we can do now is wait for the speeds. When we finally hear that the wind was legal and his speed was 75.78 mph, we really go crazy. Who could have thought that possible before we left home?
We are still ecstatic when we head back to the hotel. Just the Awards Dinner later on and then it's done. 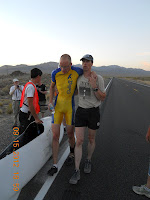 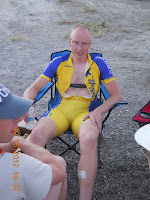