Design and development of the PP3.0 (Pieter Pas, Team Cygnus)

It all began in July 2015 during the DEKRA Record races in Germany. I had wanted to drive my Cygnus Trike during those races. Unfortunately, when I lifted my trike a day before the races, I hurt my back so badly, that I could not compete. My Cygnus Trike was a fast and narrow trike last year. A very good aerodynamic design by Thomas. The bike weighed 41 kilos after all the adjustments I made to the bike to improve the stiffness and fit. I also had difficulties with stability above 75 km/h.

In August 2015 I decided to design and build a completely new trike named PP3.0. The goal of the new design was: Lighter, more stiffness, improved streamline and steering, and a smarter rear wheel attachment. The bike had to be build tighter around my body to get a lower wet surface. I started with my Cygnus Trike. After I had fully thought over the design and ideas of the PP3.0 I got out my angle grinder and cut into my beautiful Cygnus Trike. It felt as if I were cutting my own legs off.

After that I used foam and plaster until I had the shapes and lines I wanted. After a number of weeks sanding and polishing, it was time to make the mold for the new trike. My old Cygnus Trike would serve as a plug. I could use the workplace of Alain Beirnaert, an acqaintance from Ieper in Belgium, to make the glass fibre molds. Alain is specialized in working with carbon fibre and polyester, and also in vacuum pressure techniques (www.beirnaert-composites.be). When the negative molds had been made, Alain made a copy. The bottom mold and the plug have been ruined when the copy was taken out. Just the top mold can be used to make a new copy when needed.

November to and including February have been used fully to build the trike. The aluminium sub frame from the old Cygnus Trike could still be used after the neccessary adjustments. After the optimal camber/caster angles and sized had been measured, Boudewijn Polanen (LTE Ligfietsen) and Allert Jacobs (Velomobiel.nl) executed the welding.

March was used for plastering and sanding the PP3.0. In the end the trike is reasonably smooth and ready for spray painting. Because I did not have the time to get the paint on just like I did on the Cygnus Trike, I decided to get the final painting done by a professional. 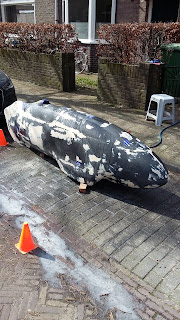 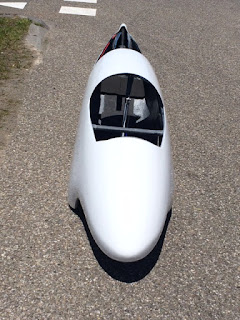 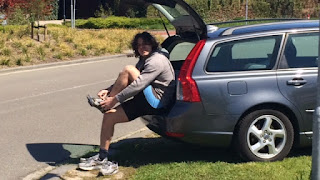 My first successful test run with the PP3.0 was in the beginning of May. Wat a great experience that was!! The last weeks have been busy with testing and tuning the bike. This will continue during the coming months.
Gepost door Team Cygnus op 09:06 Geen opmerkingen:

Those of you who know their way around tracks will have noticed that the track in the last post wasn't the RDW track in Lelystad. Nor was it the track in Aldenhoven, the DEKRA track, or the track at Opel or Ford. We have been riding on the test track of the Japan Automobile Research Institute (JARI) in Shirosato. 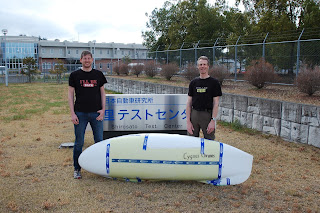 We were asked by the Japanese Public Broadcasting Company (NHK) to cooperate in a television program called Supreme Skills (Sugowaza). This program asks two teams to compete against each other to make an extreme effort. This time it was the Japanese team that will also take part in the World Human Powered Speed Challenge in Battle Mountain and Team Cygnus.
The Japanese team also had a chance to check out their performance before they will go to Battle Mountain in September.
After shooting some footage at the team members' homes or work place and at the Team Cygnus workshop in February, the rest of the filming was done in Japan at the end of March. In the Netherlands the film crew consisted of four persons; a director, a camara man, a sound man and an interpreter. In Japan everything was just huge. When we entered the JARI test track, we were under the impression that some kind of event was still going on. But that was just the film crew. 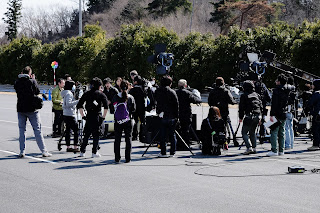 On Saturday we had the opportunity to test the bike a bit and the rehearsals for the filming of Sunday were done.

The program will broadcast on Saturday 7th May; on Japanese television that is. 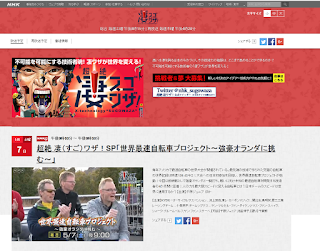 Unveiling the Chronos to the general public

During testing there was great interest in Team Cygnus 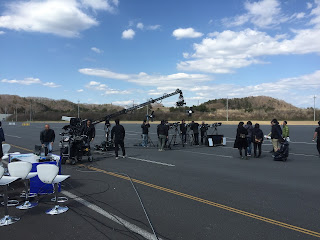 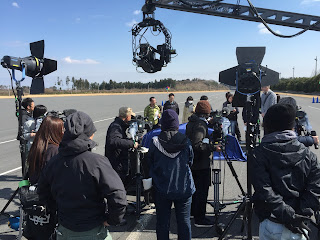